Why America Can Not Trust The Motives of Dianne Feinstein

As Senator Dianne Feinstein unveils her latest attempt at grabbing America’s guns, I thought it was appropriate to look at the history of Senator Feinstein, and see if we can trust her sincerity. Is this woman really concerned about the welfare of our citizens or is there another agenda? Ultimately you will have to make that decision for yourself. My intent is to lay out the facts and theories surrounding a woman who has allegedly made a living from corruption and hypocrisy.

Yes I realize that Feinstein was caught in a lie in this video. Big deal. My belief is that all politicians lie and people have come to expect it. I think the much bigger point is by her own admission. “If I could have gotten 51 votes in the Senate of the United
States for an outright ban, picking up every one of them … Mr. and Mrs. America, turn ‘em all in, I would have done it. I could not do that. The votes weren’t here.”

“That’s heavy man” (that’s how the throwbacks talk where Feinstein is from). It is obvious to me that Mrs. Dianne Feinstein has no respect for the second amendment. The woman obviously wants to get rid of more than “assault” rifles, as evidenced by her proposed legislation which lists various handguns and shotguns as well. She would leave

us totally defenseless if she had her way. Does that sound like a voice who supports the 2nd Amendment to the Constitution of the United States of America? I think not. She has sworn an oath. She ignores the constitution which she is supposed to uphold.

Beyond her obvious obsession with totally disarming the American people also lies a large amount of hypocrisy in the woman’s own actions.

“And then we have Senator Diane Feinstein on the Left Coast who possesses something more rare than a conservative Republican in San Francisco – an unrestricted concealed weapons permit. Apparently without shame, she 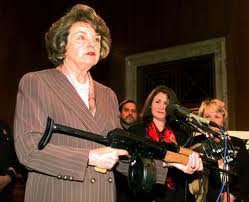 were to be melted down. One of her police body guards let it slip that she contributed a cheap model for the meltdown, while retaining her .357 magnum revolver for her own personal self-defense.” Source: http://www.federalobserver.com/archive.php?aid=10104

Now that we have the necessary proof of hypocrisy out of the way, I want to dig deeper into the political career of Mrs. Dianne Feinstein, because I want you to realize that this woman is not just another politician on the far left. She is not another harmless tree hugger in my opinion. I want to examine facts that are far beyond what the general public and media are already talking about.

My belief is that, if you weigh all of the evidence you will question what I myself suspect. Is Feinstein is another career politician who can not be trusted under any circumstances? Allegations of her bending laws and profiting from legislation are somewhat endless. Is this a person that the American people should really be listening to? It’s time for you to look at her history and decide for yourself.

Do You Remember “The Million Mom March?”

“Dianne Feinstein was closely involved in the Million Mom March scandal of 2000, in which this project of Handgun Control Inc. was exposed for using 501(c)(3) tax-exempt money for electioneering.  As but one example, the group posted the 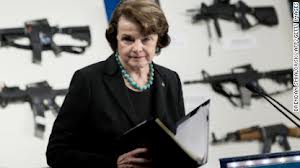 ‘You stand by your guns, Mr. Delay. Come Mothers’ Day, we mothers will stand together on the mall of Capitol Hill to remind your PRO-GUN House that on Election Day, the voters will stand by our children.’

It took the Million Mom March about three days to react to this exposure by admitting that it had lied to its donors and volunteers all along, and that it had always intended to electioneer.  The truth was, of course, that the group had been promoting candidates with tax-exempt money even before I exposed it by providing J.R. Labbe with the indicated information.  Even after this revelation, however, Senator Feinstein used her position as a senator to aid the group with low-cost airline fares for its activists.  Feinstein went even farther by repeating another falsehood with which the Million Mom March solicited money, volunteer time, and corporate contributions:

‘We now have something happening in the US that has never happened before,’ Feinstein says grimly. ‘That is, children killing children with guns. Over 13 a day.’

I looked at the Centers for Disease Control’s statistics for 1999 and 2000, and I discovered that this statement is true only if one counts ‘children’ who are old enough to vote and sign contracts. This was not a mistake. The Million Mom March even posted a web page that admitted as much; 4,233 per year comes to about 12 per day.” Source: http://www.israpundit.com/archives/52337

Have We Forgotten the MILCON Scandal?

The MILCON subcommittee is in charge of

During her six years as MILCON leader Senator Feinstein had a conflict of interest due to her husband Richard C. Blum’s ownership of two major defense contractors, who were awarded billions of dollars for military construction projects that were approved by Senator Feinstein.

That’s Billion with a capital B. My very own California Senator Diane Feinstein may have just hit one out of the park folks. By directing Billions of dollars of our tax dollars to her husbands companies, DiFi may have have set a new record for corruption.” April 3, 2007 Source: http://ridgecrest.blogspot.com/2007/04/feinstein-corruption-scandal.html

What about the fine for not properly reporting campaign contributions?

“After Feinstein’s unsuccessful gubernatorial race in 1990, she was fined $190,000 for failure to properly report campaign contributions.” Source: http://www.conservapedia.com/Dianne_Feinstein

Did Feinstein Try to Secure 100’s of Billions of Dollars in Gold Mining Rights for a Campaign Contributor?

“If Catellus Corp. receives land from the Chocolate Mountain gunnery range, the Santa Fe would control the exclusive rights to mine the gold trend for nearly 50 miles to the north. This would bypass any possibility of any open appraisal of the gold deposits.

Senator Diane Feinstein used language in the original bill that specifically stated that Catellus Corp. should receive preferential treatment in the disbursement of original government properties.

The National Association of Mining Districts voiced suspicions about continued back-room favoritism for Catellus, and as noted by the San Francisco Chronicle, Catellus has given $100,000 in political contributions to Senator Feinstein over the past four years.” Soure: http://vidrebel.wordpress.com/2012/12/31/how-gun-grabber-feinstein-stole-100s-of-billions-in-gold/

Remember Iraq? What Did Feinstein Know in 2002?

“Feinstein supported the Iraq war resolution in the vote of October 11, 2002; she has claimed that she was misled by President Bush on the reasons for going to war. However, former UN Weapons Inspector in Iraq Scott Ritterhas stated that Feinstein in summer 2002 acknowledged to him that she knew the Bush administration had not provided any convincing intelligence to back up its claims about the Iraqi weapons of mass destruction.[1]”

Ever Wonder Who Keeps Putting Products Made in China on the Shelves of Your Local Wal-Mart?

“Feinstein campaigned for trade relations with Communist China, citing that China should be granted ‘most favored nation’ in terms of trade, meaning it would get the best terms and lowest import taxes. Trade with China has destroyed many American companies, American livelihoods, and a big part of the American way of life. Jobs and 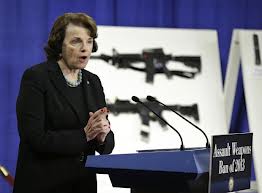 technologies were outsourced through NATFA, pushed by the Clinton administration. Today, products sold in America are made by oppressed Chinese children and adults whose labor funds their country’s military expansion. Loads of Chinese products are sold at Wal-Mart, another destroyer of American small business. In fact, Wal-Mart is the number one importer of Chinese goods through the China Ocean Shipping Company (COSCO).” Source: http://projectavalon.net/forum4/showthread.php?54460-Dianne-Goldman-Feinstein-Is-A-Loaded-Gun-Out-to-Destroy-America

Is This Woman Only About the Environment When She Gets Something in Return?

“Dianne Feinstein considers herself an environmentalist. She often boasts about her record in the US Senate, including legislation she spearheaded that resulted in the protection of seven million acres of Southern California desert. But over the past several years, instead of helping to protect pristine wildland in Northern California, the state’s senior senator has been working furiously to block what would become the first marine wilderness on the West Coast.” Source: http://www.wildernesswatch.org/newsroom/guardian/Oyster_Madness.html

Did Feinstein Lie On Her Website By Manufacturing Statistics?

“Not satisfied riding the wave of grief and sorrow that has swept the country over the death of 20 innocent children and 7 adults (all the media types ALWAYS unfeelingly leave out the poor Mother of the murdering psycho), Senator Dianne Feinstein has apparently resorted to misstatements of truth on her web site. In the section covering firearms, www.feinstein.senate.gov/public/index.cfm/ass… she supposedly cites a report by two researchers by the name of Jeffrey A. Roth and Christopher S. Koper. The only problem is she gets the name of the report wrong; the date on which it was published wrong (by two years) and the information she offers is not consistent with what IS contained in their report correctly called: ‘Impacts of the 1994 Assault Weapons Ban: 1994-1996’, US Department of Justice, Office of Justice Programs, National Institute of Justice Publication No. NCJ173405, dated March 1999.

She specifically ‘cites’ page 2 as containing percentages of persons killed. NOWHERE on this report are percentages of persons killed, wounded, or not killed, not wounded offered. The report does state REPEATEDLY that ‘Assault Weapons’ (sic) were/are RARELY used in gun crimes, even before the ban took place. We Americans need to stop, take a deep breath and realize what folks like Dianne Feinstein, Charles Schumer and others are attempting to do by manipulating the feelings of guilt and grief of the average American and doing the same with their fellow representatives and senators. If she is lying to us about this report, what other ‘statistic’ is she lying to us about or badly distorting.” Source: http://www.topix.com/forum/city/arlington-va/TKTFQ3FRO8SE28M5C

OK, I know I said earlier that all politicians lie and we expect it from them. But my biggest question now would have to be… Hey Dianne, if you are seeing statistics in a report that are not there, maybe I have misjudged you all along. I know you are from San Franscisco and maybe you can hook me up with some of those psychedelics.

Now we have two distinct possibilities.

I sincerely doubt that #2 is true. She is obviously above the status of “Frisco Junkie.” There is always the third option to be fair. Some people will believe that this is a kind and caring woman who will stop at nothing to save the lives of people in this country by taking away our guns. Just don’t touch her guns.

If you want to do further research, all the links listed will take you to full feature articles which go over alleged transgressions in more detail. I have personally seen enough to form my own opinion.

What do you think?

Dean Garrison is a husband and father of six, who faithfully pursues the American Dream. He has been MOSTLY self-employed for the last 20+ years and has been a top earner, executive and leader for several direct sales companies.
View all posts by Dean Garrison →
This entry was posted in Uncategorized and tagged Dianne Feinstein, Feinstein, Million Mom March, Richard C. Blum, Second Amendment to the United States Constitution, Senate, United States, United States Constitution. Bookmark the permalink.