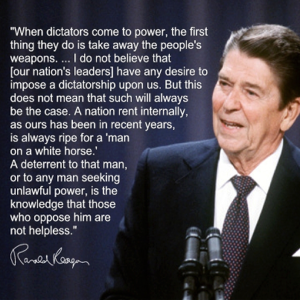 Ronald Reagan was diagnosed with Alzheimer’s Disease in 1994. I remember the day I heard about his condition. I have to admit that I cried. This man was a hero to me. Like many Americans who support the 2nd Amendment, I was incredibly angered when Barack Obama quoted Ronald Reagan from a 1994 letter to Congress. Today I want to present a “Rated-G” version of what my research has uncovered, but make no mistake. It is not easy to bite my tongue now. I want to rip into Barack with some old school language in which I am quite fluent…profanity, but I will not do that. Let’s just look at the facts.

Can you see at all where I am going? In 1994 Ronald Reagan was, arguably, no longer himself. I will go ahead and list the quote now but then let’s examine where the quote actually came from and look at some quotes from Reagan when the man still seemed to be in control of his faculties. This is the quote from 1994:

“While we recognize that assault-weapon legislation will not stop all assault-weapon crime, statistics prove that we can dry up the supply of these guns, making them less accessible to criminals.  We urge you to listen to the American public and to the law enforcement community and support a ban on the further manufacture of these weapons.” -Quote that Obama Attributed to Ronald Reagan in his speech on January 16, 2013

There are two problems with this letter. First of all, as stated already, in 1994 Ronald Reagan was, arguably, not in total control of his faculties. I feel that it’s a low blow to share this letter in light of the facts. But, it gets worse…

Secondly, and you will not see this widely reported by the main stream media, RONALD REAGAN DID NOT WRITE THIS LETTER. This letter can not be used to quote Ronald Reagan whether he was in control of his faculties, or not. Why?

This was a letter sent to Congress which was signed by former presidents Ronald Reagan, Jimmy Carter and Gerald Ford. This is not a direct Ronald Reagan quote. Mr. Obama, shame on you. Just as you took advantage of children to pull on America’s heartstrings, you also took advantage of a dead American hero by maliciously assigning a quote to him that was not directly his.

I have been mad about this for days on end and I had to research it. What I have found is more classic BHO propaganda. Reagan never said this, the only participation Reagan had in this quote was being an Alzheimer’s stricken man, who signed something he should never have signed, for it went against his life’s passion for protection of the 2nd Amendment. So how can we fairly attribute this to Reagan? It’s total nonsense. Try again Obama.

Let me share a couple Reagan quotes in support of the Second Amendment now and let’s see what this man was really about:

“The second amendment gives the individual citizen a means of protection against the despotism of the state. Look what it refers to: “The security of a free state.” The word “free” should be underlined because that is what they are talking about and that is what the Constitution is about–a free nation and a free people, where the rights of the individual are preeminent. The founding fathers had seen, as the Declaration of Independence tells us, what a despotic government can do to its own people. Indeed, every American should read the Declaration of Independence before he reads the Constitution, and he will see that the Constitution aims at preventing a recurrence of the way George III’s government treated the colonies.”– President Ronald Reagan

“You and I know and do not believe that life is so dear and peace so sweet as to be purchased at the price of chains and slavery. If nothing is worth dying for, when did this begin…? …Should Moses have told the children of Israel to live in slavery under the pharaohs? Should Christ have refused the cross? Should the patriots of Concord Bridge have thrown down their guns and refused to fire the shot heard ’round the world?” – Ronald Reagan

Mr. Obama you are a fraud. You continue to sicken me with your hypocrisy. You just urinated on the legacy of an American hero and we will not let you do that. How dare you falsely quote one of America’s Patriots to try to push forward your socialist agenda? The man you should really be quoting is Adolph Hitler:

“This year will go down in history. For the first time, a civilized nation has full gun registration. Our streets will be safer, our police more efficient, and the world will follow our lead into the future!” – Adolph Hitler, 1935, on The Weapons Act of Nazi Germany 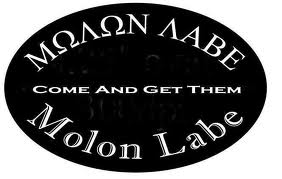 Mr. Obama we are not stupid and we know what this is about. You can keep pushing and we will keep pushing back. You will not take our guns. This is not negotiable.

Dean Garrison is a husband and father of six, who faithfully pursues the American Dream. He has been MOSTLY self-employed for the last 20+ years and has been a top earner, executive and leader for several direct sales companies.
View all posts by Dean Garrison →
This entry was posted in Uncategorized and tagged Barack Obama, Gerald Ford, Jimmy Carter, Obama, Reagan, Ronald Reagan, Second Amendment to the United States Constitution, United States. Bookmark the permalink.

40 Responses to Obama’s Reagan Quote? Propaganda from Your President